The formidable - and it turns out profound - Mike Tyson once said "everyone’s got a plan - until they get hit!"
As poignant for the sweet science as it is with fishing. But maybe not as painful.
Because the best laid plans of mice, men and anglers often go astray.
When you loaded your outfit in the fishing rig it all sounded so simple. The flies that they say are hatching would be there - just like last year.
And the river would be running sweet, clear with just enough flow to make the trout brave and cover up your casting and wading errors. Easy-peasy.
Wrong. Because when you get to the water all the action you had planned for and dreamed about is not present. Despite what the fishing journal entries, hatch charts and social media chatter all said.
You just got hit. 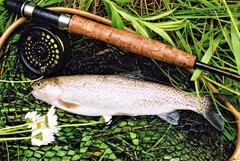 To have a successful day anglers should be prepared to adapt.

So either you wasted a tank of gas and a day of yard work or you implement Plan B.
Whether this be bottom-bouncing weighted nymphs under a strike indicator, swinging wet flies or streamers with a sinking line or even more drastic, changing locations, having a back-up with the gear and knowledge to execute it is a great way to save the day and turn a shut-out into a success story.
Always assume that everything that might go wrong will go wrong. Be ready to adapt and re-calibrate, to run and gun.
Like Mike Tyson says. And I’m not about to argue with Iron Mike.