Heading out on an angling adventure is often a balancing act between risk and reward.
And staying in touch is vitally important as much to the road-tripping angler as it is to the peace of mind for those left behind at home. Angling often takes place in rugged and remote country which can be as beautiful as it is cantankerous. And there are numerous things that can go wrong.
Even with the advent of several competing mobile communication companies and communication tower clusters occupying almost every pimple on the prairie, there are still many parts of Alberta where cell coverage is just a rumour. Many of these black holes are in angling country. 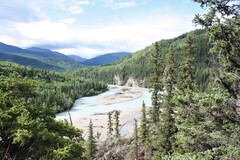 Many angling adventures take place away from cell phone coverage.

Obviously leaving behind a note detailing where and when the travelling angler is going is a primary way of assuring safety, but because Angling Country more often than not overlays Alberta’s Oil Country, locating a natural gas processing plant or other significant oil patch instillation will usually result in a strong cell phone signal where a few klicks down the road none was obtainable. Also many personal electronics corporations market satellite communications devices that eliminate the need for a cell tower signal. Play hard. But also play it safe by staying in touch.