Keep Your Fly On The Water

One of the biggest mistakes I see with many beginner fly fishers is that they make far too many false casts. You would think they were reshooting the movie "A River Runs Through It" with all the fly line going back and forth in the air. False casting is used for three things: changing direction, lengthening line or drying your fly. If you are not false casting for one of those reasons you are wasting both time and energy. I always say the fish are in the water, not in the air. When your fly is in or on the water you are fishing, when it's in the air it's casting. The more time spent fishing the better chance you have of catching fish. On small streams you should hardly be casting at all, a roll cast or a roll cast pick up to a backcast then forward cast and release is all that is needed. 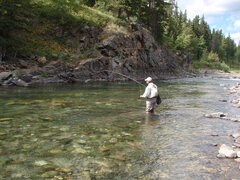 Reducing the amount of false casting you do during fishing will increase your odds of being successful.

On larger rivers or on lake you may need to false cast to lengthen your line but by practicing your casting you should be able to minimize the false cast necessary to achieve the desired result. Also there are a few advantages to making less false casts. One is that you won't be as tired at the end of the day and the second is there is less chance of getting a tangle or in trouble with the bush behind you. Often I see beginner's false casting and if they would have presented the fly two false casts earlier they would have had a great cast instead of the tangle that often occurs. So practice picking the line up off of the water and send it back on its' way with few or no back casts, you will be rewarded.