It was a miserable day. Winds were 40 sustained, gusting 70 km/hr. The rain was spitting, it was overcast and cool. Some might even say cold. It was uncharacteristic weather for this early summer day. Still, this is the day my good friend Shona and I decided to go trout fishing, and we were heading to Muir Lake, just west of Edmonton, and we were heading out in spite of the weather.

We got to the lake and it looked about as nasty as we figured it would. We launched the boat and decided to troll, covering water, looking for active fish. Boat control was challenging, and our lures and flies were largely ignored for the first hour of effort. But when we trolled into the second basin, in a strip of exposed water, dozens of swallows were skimming the surface. There were all concentrated in a small area of the lake about 50 meters wide and a hundred meters long. They appeared to be picking things off the surface. "Chironomids," I muttered to myself, and kept a half eye on them while we continued to troll. 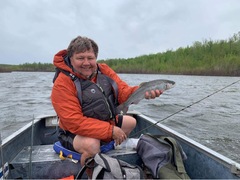 Crazy winds and spitting rain, still we went out. And by following the swallows we got on the bite.

Another half hour passed and I see the birds are still at it, and our trolling is having no effect. "I want to check something out," I said to Shona. We boated over to that wavy strip of water and I set the anchor off a long line. I watched the birds, and sure enough, there little heads would stretch down and pick things off the frothy surface. "I think they are on chironomids," I say to Shona, and ask her to pass me a rod carrying case that has exactly two rods prerigged with chironomid patterns under strike indicators. I pulled one out, cast it into the waves and before a count of ten that little bobber shot under. The hookset was good and a 15 inch rainbow rocketed skyward. Next cast, same result, but this time the strike happened before a count of five. 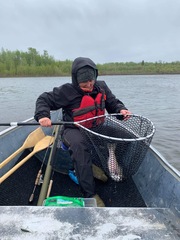 A bead head nymph fished near bottom got tons of trout to bite.

Shona grabbed the other rod and the action was non-stop. It was almost a bite a cast. In the crazy waves, huge wind, and spitting rain, we were inundated with biting trout. We easily have over a hundred bites in the two hours we fished and somewhere in all of that action Shona sets the hook and her rod just stays down. "That’s a good fish," I say to Shona as I watch the show. In time she gets it up and it’s a really good rainbow. 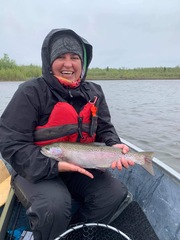 A personal best, and a wonderful reward for braving the conditions.

This one pushes 53 cm, and marks Shona’s PB. With that, we are satisfied, and we also come to the realization that we are both quite chilled. It’s hard to pull yourself away when you’re in the middle of a feeding frenzy. But thanks to the swallows, and to us for going to check it out, we found the bite, and turned a tough day into a tough day with lots of biting fish. It is always worthwhile to follow nature’s clues.